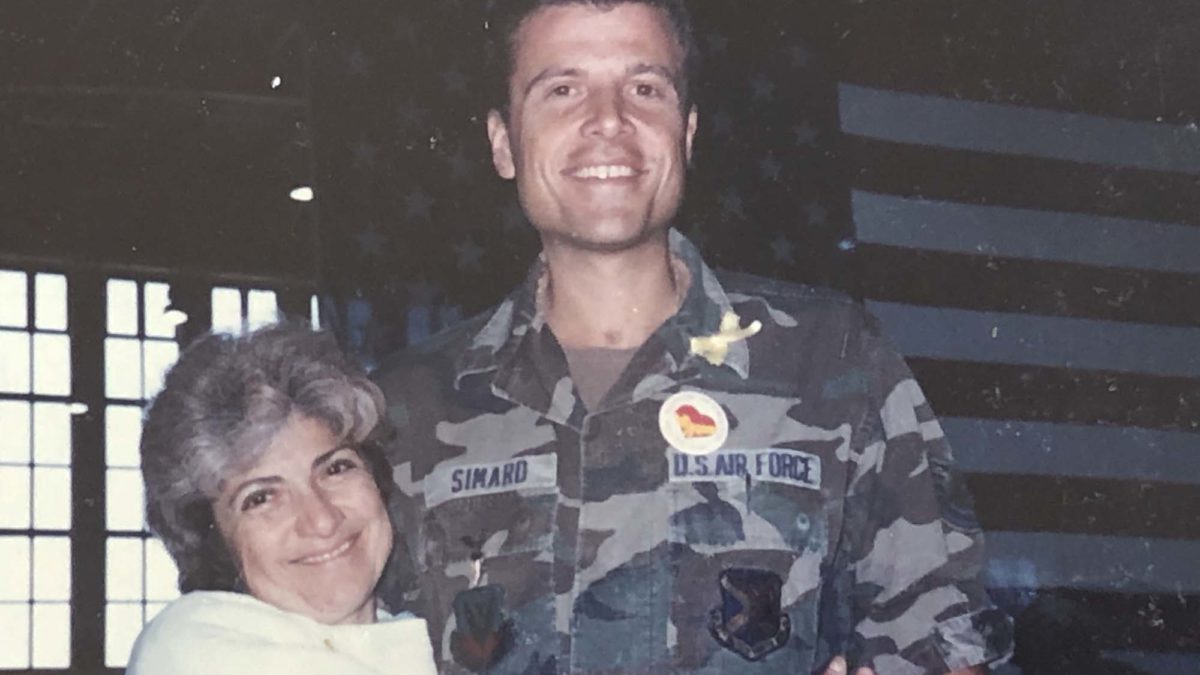 By year’s end, more airplanes and personnel continued to arrive at King Khalid Air Base, preparing for what was assumed would be an eventual invasion. “Everyone wanted to get on with the fight so we could go home,” Rene says.

Five months after leaving Tonopah, the buildup known as Desert Shield was finally complete. On January 16, 1991, President George H.W. Bush announced the launch of Operation Desert Storm to expel occupying Iraqi forces from Kuwait. Rene said the F-117s took off from King Khalid that night under the cover of darkness like they did every night. But since he knew the pilots were headed for actual targets and he wouldn’t be able to sleep, he, along with most everyone in the wing, stayed up to make sure all the airplanes arrived back to base safely after completing their missions.

All the airplanes did return safely. Rene and his colleagues in the wing ops center counted the F-117s as the returning airplanes landed throughout the night. Once the final F-117 landed, they cheered and gave high-fives. Rene felt a tremendous sense of pride and relief. “After all those months of anxiety and preparation, something was finally happening,” he says.

The relentless invasion continued for over a month, then President Bush declared a cease-fire on February 28 and the war was over. For the next 30 days, Rene and his colleagues developed logistics plans, known as “redeployment plans,” for how to move the wing of F-117 aircraft back home to their base in Tonopah, Nevada. The decision was made to leave a small fleet of F-117s at King Khalid Air Base, along with the personnel needed to fly and support the aircraft. Soon after, the other F-117s and their support personnel were the first to leave for home. However, Rene and most of the logistics staff who were part of the first wave were among the last to leave. “First-in, last-out is the life of a loggie,” he jokes.

Operations wound down in late March and early April, and Rene began to count the days before he was scheduled to depart for home. His workdays were less intense, so he found he had more time to relax. Letters from home arrived less often, so he did what everyone did—he hit the gym and worked on his tan at the base pool since temperatures were already in the 80s.

Since he was determined to not sit knees-to-knees on the return trip back to the U.S., Rene requested that he and his fellow troops fly home on a C-5, a large military transport aircraft that has reclining airline seats in the upper deck above the cargo deck. The risk was that the C-5 was notorious for breaking down, but after an eight-month deployment, everyone wanted to have a comfortable flight home.
Rene was able to secure the aircraft, and in mid-April 1991, he, his colleagues, and their crowded C-5 departed for the hopscotch trip home. A few days before leaving, he let his family back in Salem, New Hampshire, know that he would be having a layover at Westover Air Reserve Base in Massachusetts and invited them to stop by to say hello for a few hours. Many U.S. aircraft coming back from Operation Desert Shield/Desert Storm passed through Westover to be processed back into the country and to refuel.
Rene thought about his homecoming as they flew west from Saudi Arabia and his first war-time deployment, which eventually became known as the Persian Gulf War. His most memorable layover on the lengthy trip home was at Shannon Airport in Ireland, where he had his first beer. “I guzzled a Guinness, of course, and it was refreshing,” he says. “Although we were limited to two beers so things didn’t get out of hand, everyone was in a celebratory mood. To no one’s surprise, we all passed out once we got back on the C-5.” 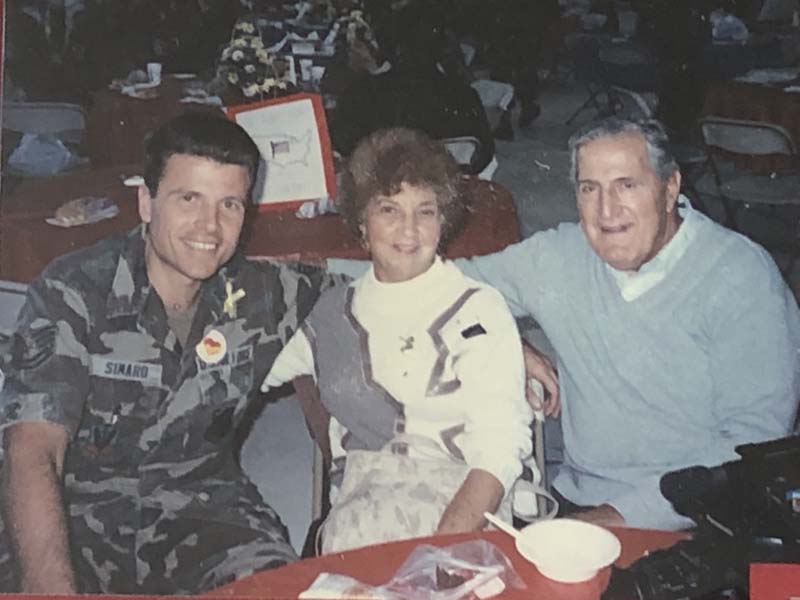 Also not a surprise was how the Simard contingent turned out in droves at Westover Air Reserve Base early in the morning a few days later to meet their favorite Air Force troop. Once their C-5 landed and taxied to the hangar, a representative from the base came aboard the aircraft and made this announcement: “If there is a Tech Sergeant Simard on board, we want him to get off the airplane first because there’s someone here waiting for him.” Rene flushed with embarrassment and got an appropriate amount of ribbing as he gathered his belongings and headed for the exit.

Once he walked out into the dark chill of early morning and got a generous whiff of jet fuel, Rene was taken aback by the number of Vietnam veterans lined up along the walkway who began clapping and extending their hands, welcoming the troops back to U.S. soil. Welcome Home signs, balloons, and ribbons were everywhere. Rene smiled and thanked the veterans, but avoided looking straight into their eyes as he fought to maintain his composure.

He entered the Westover Air Reserve Base hangar at 4 a.m. while Lee Greenwood’s emotional song, Proud to be an American, played overhead. Rene caught a glimpse of his parents, siblings and their spouses and children, plus his maternal grandparents, “Nana and Nano” Pappalardo. His entire family had made the trip from southern New Hampshire in the middle of the night, just to spend a couple hours with him. “Everyone was clapping and shouting, and my mother and sisters were crying. I don’t remember who I hugged first, but getting to see and be with my family again will always be one of the most memorable moments of my life.”

However, the most impactful moment at Westover was walking past the veterans wearing their Vietnam Veteran ball caps who lined up to greet Rene and the other returning troops. “For them, welcoming us home was healing because they got to see the American military treated with the respect the way they wish they had received when they returned home from Vietnam,” he says. “Some of them were understandably emotional. They had waited 15 to 20 years to receive their thanks, and they were there to welcome all the troops who passed through Westover that day.”

Although his pen pals, Jason Chan and Jennifer Smith, were not at Westover to greet him, busloads of other schoolchildren were at the hangar, waving American flags and asking the troops to autograph their t-shirts. “Seeing and talking with the kids lit a fire in me some more,” Rene says. “The Air Force became more than a job. Witnessing how the kids looked up to us helped convince me that making the military a career was the right choice.” A young schoolgirl was collecting dog tags from troops, so Rene gave her one of his dog tags that he had worn since basic training almost 13 years before.

For the next few hours, Rene ate and drank American food and beer while he visited with his family and held his nephews, A.J. and Kyle, in his lap. Several of his Air Force colleagues came by to introduce themselves and meet his family. Since at least two airplanes returning from the Middle East landed every hour, the hangar swarmed with troops and well-wishers. An Army Lieutenant, who was also on a layover at Westover, stopped by to ask if he could hold Kyle and have his picture taken with him, because Kyle looked so much like his own son. 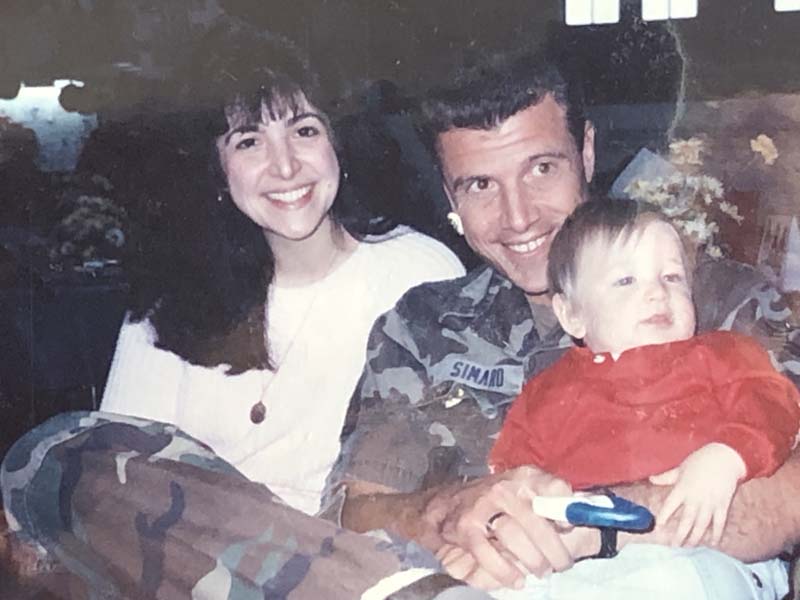 A few hours passed, then Rene’s contingent was informed their C-5 needed repairs so their stay would be extended. He was not surprised to hear the airplane needed repairs, just thankful the plane had broken down at Westover instead of somewhere else. Finally, around noon, it was time for Rene to depart. Members of his family, who had gotten up after midnight to make the trip, were understandably exhausted, since their two-hour visit with Rene had turned into eight hours.

Teary-eyed goodbyes and hugs later, Rene got in line and exited the hangar with his Air Force colleagues, waving farewell to his family and the Vietnam vets as Phil Collins’ Take Me Home played overhead. While they walked to their C-5, another plane-load of troops walked toward the hangar, still being greeted by the same Vietnam vets.

Shortly after arriving back at his duty station in Tonopah, Rene was selected for promotion to Master Sergeant, known as an E7. He had never looked at military deployments as opportunities before, but that deployment helped him assess other future assignments differently. “The military, unlike corporate America, is a great environment for that,” he says. “Some aren’t willing to take on new challenges, but that experience was the first time I realized you have to take risks, learn, and expand your skill set. Because if you don’t, you risk becoming irrelevant.”

In hindsight, his deployment also had a tremendous impact on his future leadership style. He was confident before deploying, but he was thrust into his job during the build-up to the invasion as an E6 with way more responsibility than most E6s have. He also realized he had notable social skills, eventually becoming the go-to person for higher-ranking enlisted personnel and officers who often sought him out for advice. “We were able to execute on our mission, thanks to all the incredible support from home,” Rene says. “I understood that not everyone agreed with the operation, but I took an oath. That deployment, in particular, reinforced why I answered the call to serve.”

Rene continued to write to Jason, who eventually struck up a friendship with Rene’s father. Even today, Rene still sends and receives holiday cards from Jason and from Jennifer Smith and her family. 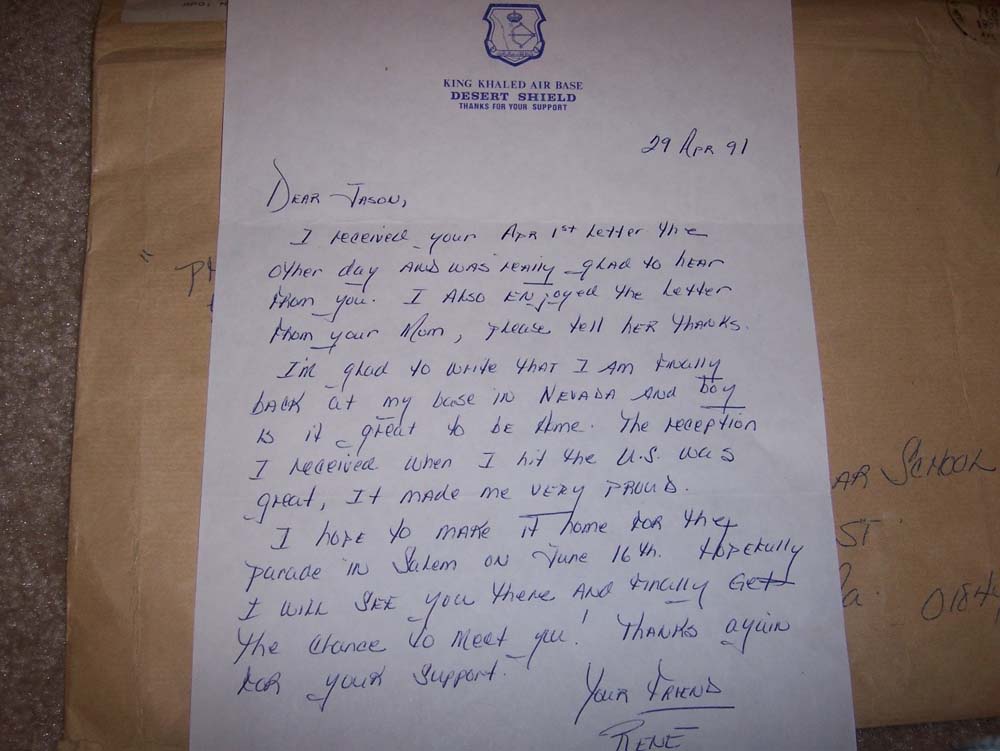 Jason sums it up best. “I think it’s funny how life turns out,” he says. “Rene was still a young man when he wrote these letters to me, yet he was mature enough to make an investment in a child. He gave up his sleep and free time while on a tough deployment in Saudi Arabia to inspire me. I have always been thankful for that. When he wrote those letters, I don’t think he ever envisioned still remaining in touch with me. But here we are, 30 years later, able to tell our story and smile about it.”

In closing, here’s to listening, leading, and finding the grace to help each other endure through these puzzling times. I leave you with a line from the masterful song titled Heroes from the late David Bowie:

We can be heroes, just for one day…