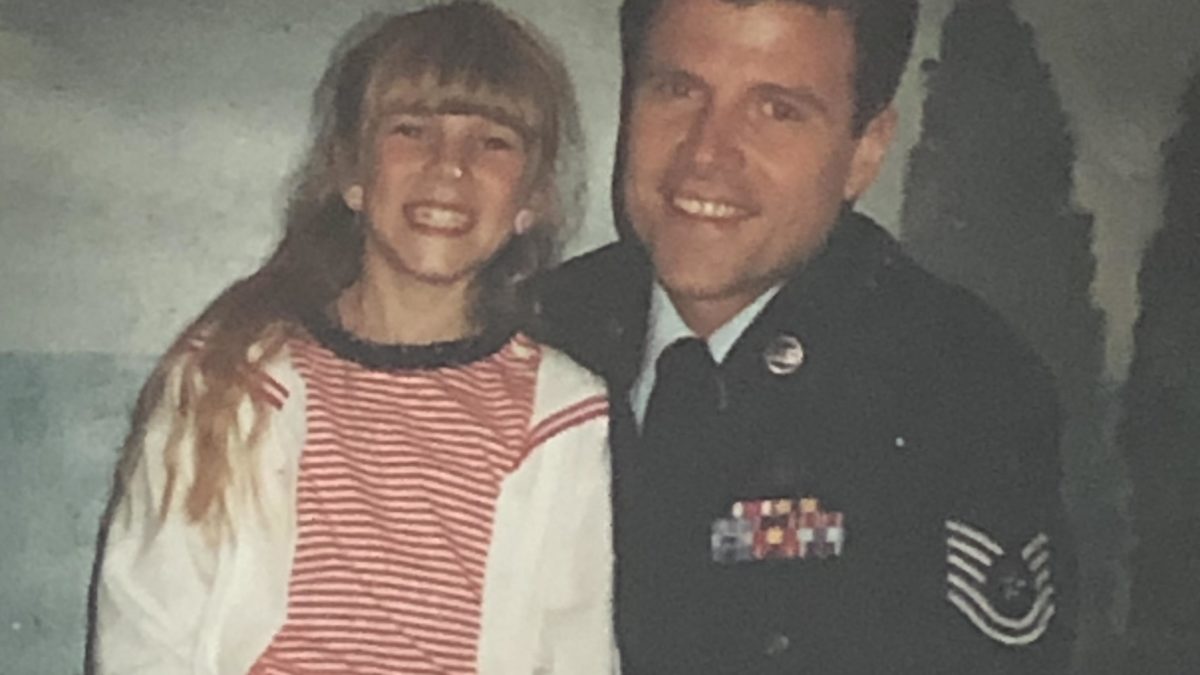 Rene and his Air Force colleagues were stunned by the volumes of letters. “We brought handfuls of letters back to our house each night to read,” he says. “Letters from home were always the best, but letters from kids were a close second.”

What? Letters? Yes, in 1990, letter-writing was still a thing. Electronic mail (email) and that grating AOL announcement, “You’ve got mail,” were still a couple years away from making their way into mainstream America.

When they weren’t drinking O’Doul’s and playing cards or dominos, Rene and his housemates spent evenings at their house on base, handwriting letters back to family members and schoolkids. Initially, Rene felt guilty if he let a week go by before he was able to get responses back to the young children. “Some of them were really little kids who were just learning how to write,” he says. “It was adorable.”

Back in Salem, New Hampshire (population of 30,000 at the time), where Rene grew up and his parents still lived, his mother, Josie, was sick with worry that something would happen to her oldest son while he was deployed to the Middle East. So, like all noble patriots, she got to work. 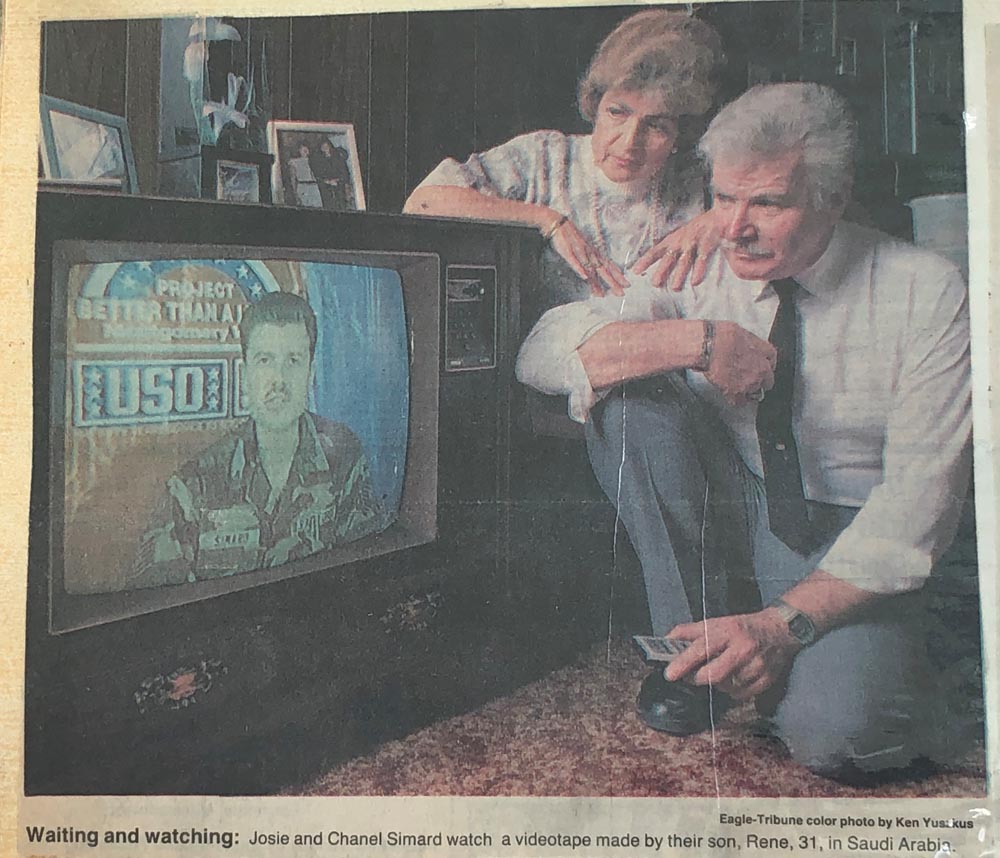 In addition to starting a support group for families of deployed military members, Josie Simard fired Salem up with American spirit, encouraging residents and businesses to display yellow ribbons and American flags along Main Street and Route 28. And then she helped launch the mother of all letter-writing campaigns by gathering the names and addresses of the military members deployed to the Middle East with ties to Salem, then had the information printed in the Salem newspaper. Some of the teachers at local schools, including a few who taught Rene decades before, asked their classes to write letters directly to troops deployed from Salem and surrounding areas.

One thing to say about my beloved mother-in-law is that she always delivers. A few weeks later, Rene began receiving letters from schoolchildren in the Salem area. He no longer had to grab handfuls of letters addressed to “Any Service Member” because he received so many letters addressed directly to him. In fact, on one day he actually received 40 letters from Salem-area kids.

Those who know Rene well will understand why he felt it was important to respond to every letter. “I love our country so much that I thought it was part of my patriotic duty to respond to anyone who took the time to write me,” he says. The encouragement and assistance from home was overwhelming at first, but Desert Shield was the first significant build-up of troops and looming U.S. conflict since the war in Vietnam ended about 15 years before. Since all branches of the military encouraged their troops deployed to the Middle East to be interactive and express their appreciation for the outpouring of support, he did everything he could to help the children understand what he was experiencing.

At one point, Rene set aside the entire morning of one of his days off each week to respond to letters addressed to him. “I hated using printed form letters, but I had to do it,” he says. “However, I always wrote a personal note at the bottom.”. 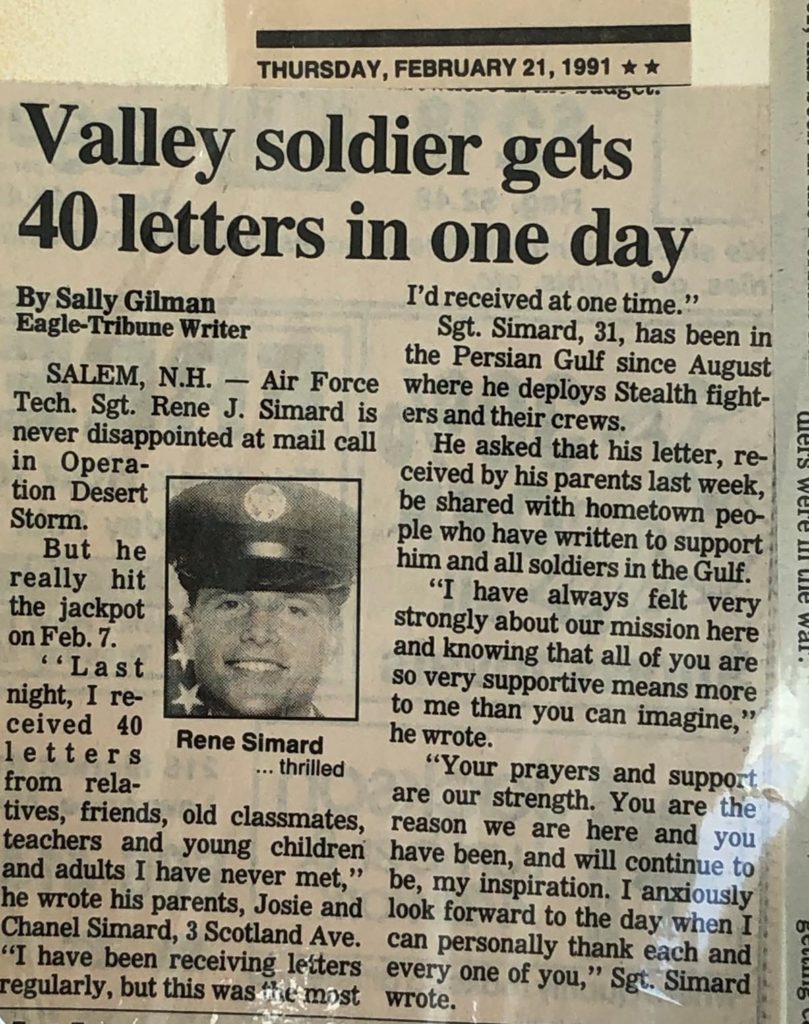 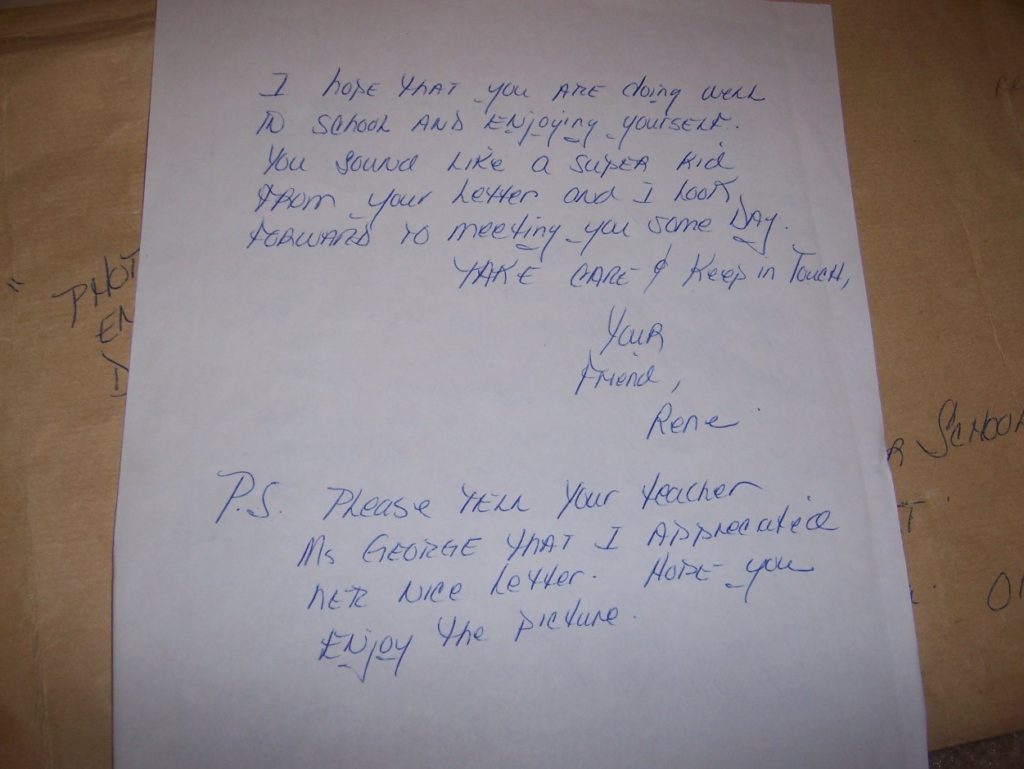 Two Salem-area schoolkids, Jason Chan and Jennifer Smith, were among the few who kept writing him back. He liked corresponding with them because he could tell they actually read his letters. Jason, who was a 7-year-old second grader in Mrs. George’s class at the Comprehensive Grammar School in Methuen, Mass., about five miles south of Salem, seemed particularly mature.

Both Jason and Jennifer have kept in touch with Rene and his family over the years. I recently reached out to both to ask if they would share their thoughts about how their time as Rene’s pen pal helped shape them into who they are today, and both said they were happy to do so.

“I was definitely interested in the military when I was younger,” says Jason. “I played with GI Joes when I was small, and seeing a real soldier was akin to how kids feel when a cop or an NFL player comes to their school. We admire them and want to be like them. At that age, I think I just liked seeing soldiers and aircraft. Both left me in awe.”

Jason says he was proud to receive a response from Rene, noting that only some kids got a return letter. “Luckily, I was paired with Rene,” he says. “Our teacher would announce the letters she had in her possession and would hand them out to each student who got a reply. It’s funny, but I would hold Rene’s letters like a trophy. Never mind that I was too young to read Rene’s adult handwriting, I would open one of his letters and just stare at it with pride. Then, Mrs. George would read all the letters aloud to the class.” 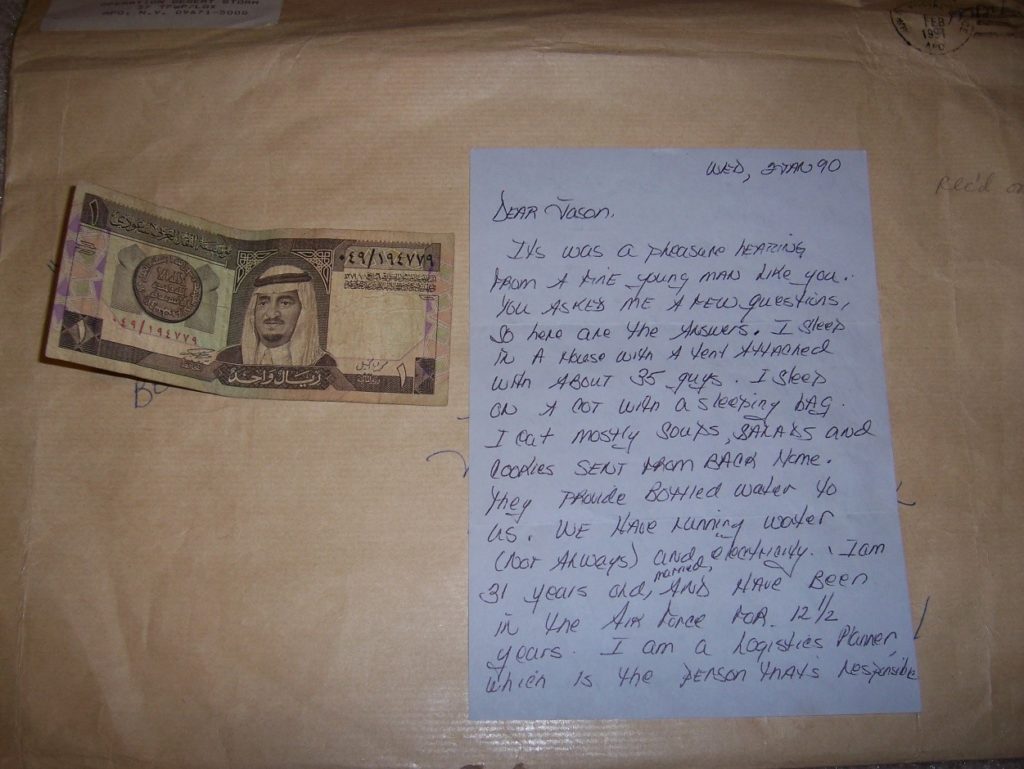 With each round of letters, fewer students got replies, but Jason kept getting letters from Rene. “I clearly remember the moment I was about to receive a large package from Rene,” he says. “My teacher said to the class, ‘We got letters back from the soldiers, and Jason got a really big package.’ She pulled out the package and I beamed with pride. All the students, and my teacher, were curious to know what was inside, and all my classmates gathered around my desk as I opened the package. I remember getting to show everyone an F-117 photo and a Saudi riyal. It was actually one of my greatest memories from second grade, and the F-117 picture still hangs in my old room in my parents’ house.”

In 1990, Jennifer (who goes by “Jenn”) was in the second grade when her teacher tasked her class to make Christmas greeting cards to send overseas to the troops. “The details are a little blurry, but I remember the front of the card—we used cotton balls to create a snowman—and I included my school picture inside the card,” she says. “Out of the 25+ greeting cards sent from my class, I was the only person to get a response. I received a response from Rene Simard, US Air Force, and he was from my hometown! I was so so happy, and I didn’t even know how to pronounce his first name!”
After exchanging several letters, Rene sent Jenn a picture of himself, which she had framed. “Over the years in school, I wrote essays about the experience of having a pen pal. It meant so much to me to have such a unique story to tell.”

In the summer of 1991, Josie helped the town of Salem plan a “Welcome Home Troops” event that included a parade down Main Street and a rally at the Salem High School, followed by a dance show. Rene was back from the Middle East by then, so he got to attend and wore his dress blue uniform. Jenn spoke in front of a packed auditorium about her experiences of being Rene’s pen pal, then she performed a solo at the dance show afterward. “I remember being very nervous for both, but I was more excited for the afterparty at the Knights of Columbus and getting to know Rene, his parents and his family better,” she says. “I also got to wear this adorable patriotic outfit!” The cover photo for this blog post is of Rene and Jenn on that special day.

Throughout the years, Jenn randomly ran into Rene’s parents around Salem and would get caught up on everything he was up to. “They would always greet me with the biggest hugs and would be so proud of everything I was doing in school, sports, work and life in general,” she says. “It was always such a joy to see them—they sure knew how to put a smile on my face!” 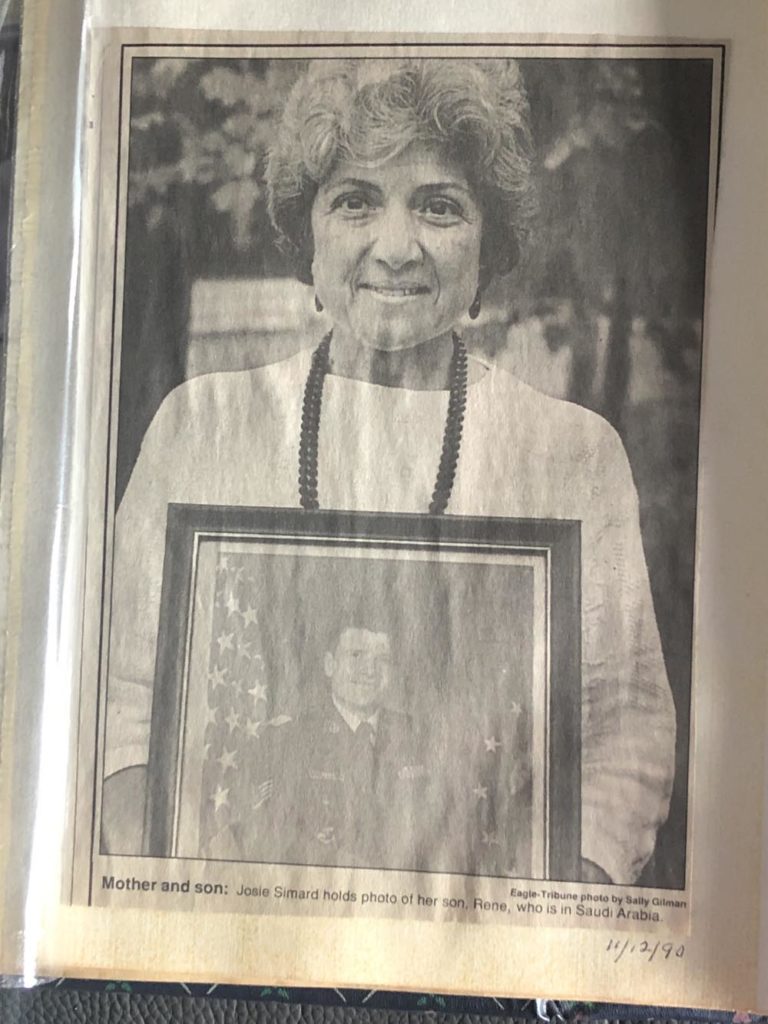 Jenn said she made a lifelong friend by just mailing a letter as a class assignment, and admits she kept Rene’s framed picture in her bedroom throughout childhood, in college and in her first few apartments after college. “To me, Rene represents so many things—positivity, integrity, courageousness, and hope—to name a few,” she says. “I like to think of having the framed picture there for so many years as a symbol of all those attributes.”