5 Years a Survivor. Now What? 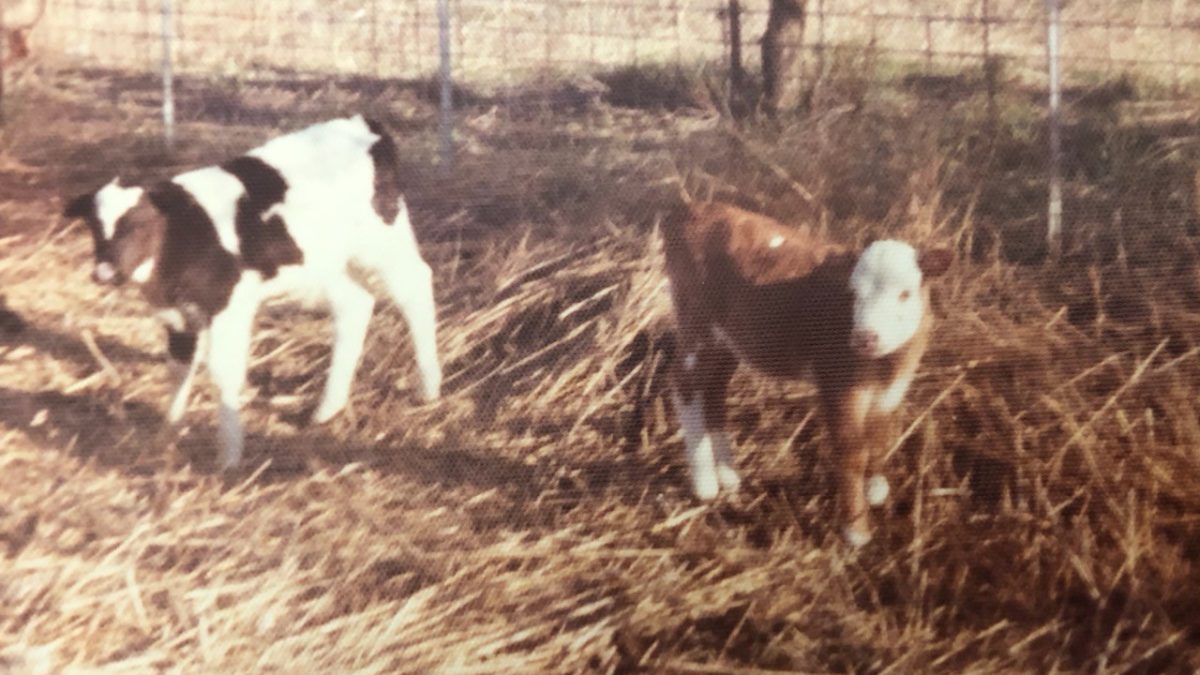 Spring. What a lovely word. When used as a noun or a verb, spring represents feelings of change, hope, rebirth, optimism, and growth.

This year, I will add perseverance to the mix. Yes, the early days of spring 2020 will be remembered by our patience being tested in unthinkable ways. The behavior pendulum ranged from gracious to childish as we painfully realized we are STILL not in control. Since this chapter in our lives is far from being over, I am curiously and closely watching the (unfortunately few) leaders who are leading from the front, trusting their followers and providing guidance and instruction with confident, distinct messaging. Not to mention patience, dignity and compassion.

Pandemic notwithstanding, I can see spring in my mind. It is a mixture of pale yellow, light lavender, baby blue, mint green, and—oh yeah—that gag reflex-inducing shade of pink. Actually, pink gets a pass from me this time of year, because it reminds me of Easter bunny ears and tulips, not that other vile thing. 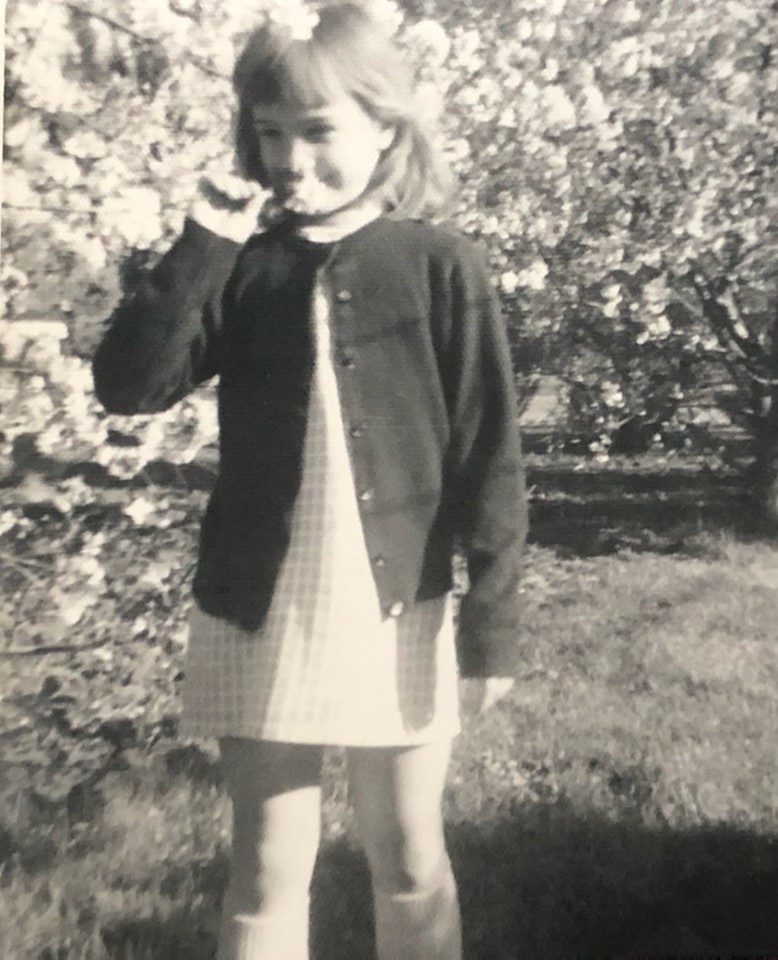 Growing up, springtime meant my Catholic friends would be giving something up for Lent, only to be taunted by Protestant heathens like me who waved chocolate candy under their noses. In my hometown circles of Cotesfield and Elba, Nebraska, you were either Catholic or you weren’t. There were so many Catholics that at our high school’s graduation on Mother’s Day weekend, every other year a Catholic priest gave the invocation. In the off years, we switched between the other “big three,” usually Lutheran, Presbyterian, or United Methodist, ministers.

For two springtimes in a row, probably starting in 1975 when I was nearly 10, my father decided it was time I gained some additional responsibilities that stretched beyond my daily paper route. It was also time for me to learn about business and earn some serious coin. By raising calves.

Now, what did this princess know about raising livestock? Less than diddly. I knew that dad “bought” half a cow (yes, that was possible), or sometimes a whole cow, plus a pig, at each year’s county fair. A few weeks later, he drove his International Scout home full of laundry baskets filled with frozen meat. Which were then transferred to our three—yes three—chest freezers in the basement. One year I counted all the 2.5 lb. packages of hamburger he brought home, and I stopped counting at 50.

The first year I raised calves, dad took me to the livestock sale in Ord, where I picked out a Holstein (soon to be) steer and a Hereford heifer with a sweet white face. Weeks before, I had helped him put up wire panel fencing around a barn next to a house we owned across the road from our house. The house, full of cobwebs and salamanders, was used for storage, and we called the place “Green Acres.” 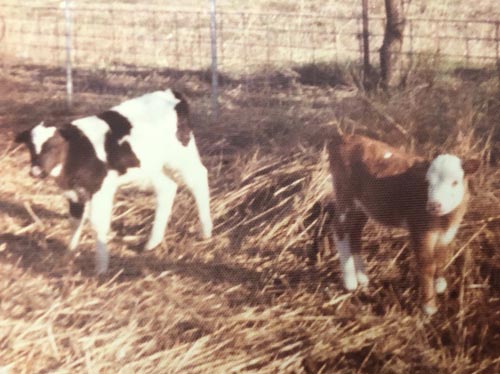 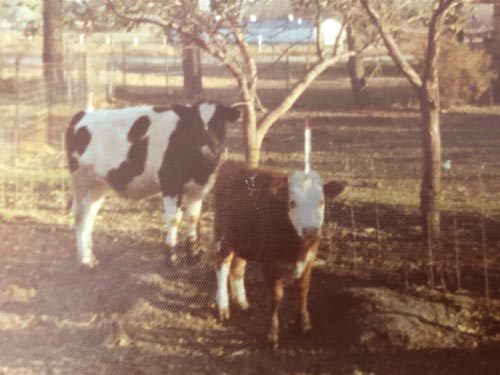 Dad also took me to the Cotesfield grain elevator to purchase a 50 lb. bag of powdered milk for the calves, called milk replacer. He had already bought me two two-quart bottles with red nipples. Topping it off was a 50 lb. bag of regular calf food and another 50 lb. bag of alfalfa pellets, which he told me to feed the calves sparingly, because it was rich for their stomachs.

For the next several months, I woke up to the sound of calves a half-block away bawling for their milk every morning at 6:30. I thought their crying was cute on Day 1, but by Day 2, it was annoying.

Just like powdered milk for humans, milk replacer is exactly what it is intended to be, a cost-effective alternative for calves that have been weaned from their mothers. But it reeks—a distinct odor that rivals fresh vomit, or at least it did forty-some years ago. After I spooned the proper amount of milk replacer into the bottles and filled them up with water from the garden hose, I held my breath as I secured the nipples on the bottles, then gave each a good shake. I carried a bottle under each arm through a half-acre alfalfa field, trying not to scratch my legs on old alfalfa stalks, to get to the calves’ pen. The closer I got, the louder they bawled. I slid each bottle into the metal bottle holder that hung over the fence, then the calves abruptly stopped bawling and started furiously drinking their fake milk as though it was a timed contest. The Holstein calf was bigger, and always sucked harder on the bottle nipple, creating foam bubbles that streamed sideways out of his mouth in a perfect drool line to the ground. In less than 60 seconds, both bottles were empty, so the calves started butting the bottles with their heads, hoping more milk would appear. As I attempted to pull the bottles out of the holders, all that milky drool flew everywhere and usually ended up on my t-shirt and in my hair.

Sticky, stinky milk replacer aside, I miss those days of innocence this year more than ever. Forget about a delayed baseball season and no college basketball tournaments—spring 2020 is upsetting and unsettling. Life became unimaginably complex over a handful of days, and some leaders are proclaiming we are once again at war, being asked to sacrifice, to put others’ needs above our own, and to respond to an extraordinarily high calling.

Along the way, just like in the now “good old days” of four weeks ago, I cringe whenever I read or see bad behavior, and I rejoice when someone creates, then implements, cost saving/efficient/win-win ideas. Ideas that would never have seen the light of day when the Dow Jones Industrial Average was knocking on the door of 30,000 in mid-February, barely six week ago when the world seemed invincible. 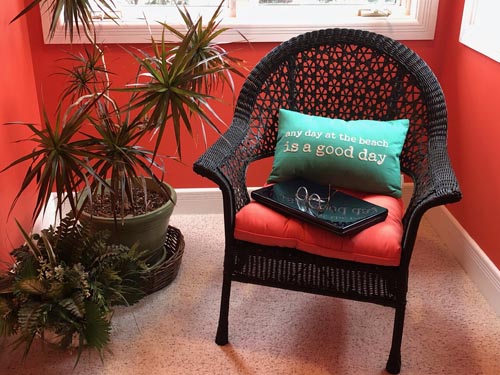 I believe trying times bring out the best in some of us, and the worst in others. Our government leaders remind us to be flexible, which means be sure to stay updated on the “you can do this but not this” list because it likely changed from yesterday. My work-from-home Bye Aerospace workspace has taken over my sacred writing space in the home office, so I have relocated my writing place to the Tommy Bahama bedroom.

Take that, COVID-19! You can force me to work from home, force me to temporarily relocate my creative set-up, and make me cringe at examples of poor leadership, but you haven’t come close to shutting me up.

By the way, I didn’t have the heart to go with dad when he loaded up my calves in the horse trailer and took them back to the livestock auction late in the summer of 1975. But I sure loved depositing the check he brought home in my savings account.

Please continue to take care of one another!